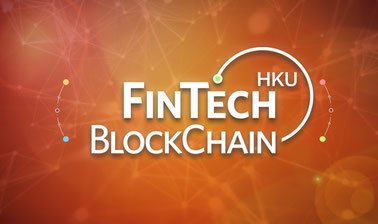 This course id from edX, scroll down & click “Read More” for more informations.

Blockchain is a core technology in FinTech. The original design of blockchain focused on the cryptocurrency “Bitcoin”. Due to its specific characteristics, many companies and users now find blockchain very useful for applications in many areas, not limited to cybercurrencies, including finance, logistics, insurance, medicine and even music. However, the design of blockchain involves cryptographic technology, which cannot be easily understood by those who are not professionals in the area of IT and security.

In order to better understand what kinds of applications best fit blockchain and other forms of distributed ledger technology and the potentials of these emerging technologies, it is important to understand the design rationale, the basic technology, the underlying cryptographic fundamentals, and its limitations. This 6-week online coursewill walk you through the following:

The course aims at targeting a wide audience: This course will provide learners a good understanding of the technological, applicability, limitations and “illegal” usage of the blockchain technology.

Welcome to Blockchain and FinTech: Basics, Application and Limitations

Introduction to Blockchain and FinTech: Basics, Applications and Limitations is a six-week six-module course. Each weekly module compiles 6-12 lesson units (or subsections). In addition to the main units of the lesson, there are also Industry use cases highlighting real world examples and applications from different industry sectors.

The major learning activities within each lesson unit include: video discussions of major aspects with peer learners, instructor and community TA, as well as continuous assessment in the form of Quick Check questions, Polling and Word Cloud activities. In addition to these, there are a range of additional resources provided, including blockchain industry news reports, studies and useful links. There is a Conclusion Quiz at the end of each module to draw out the main messages.

Module 1 Blockchain Technology: Why, What and How 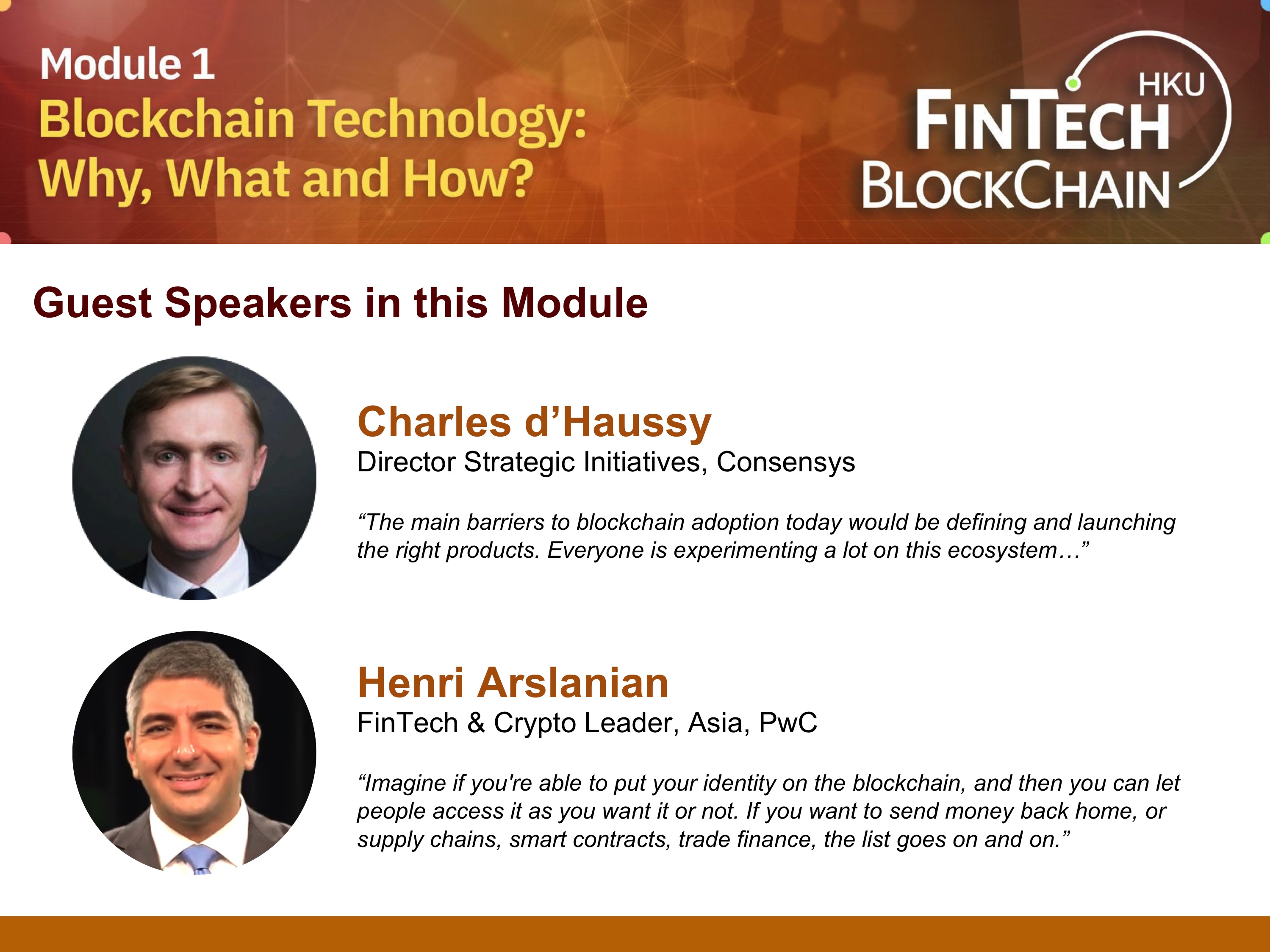 After completing Module 1, learners should be able to:

Do you know the difference between a “decentralised” and “distributed” systems?

Why do we need a decentralised ledger?

Why Do We Need a Decentralised Ledger System? (Part 1)

Banking transactions demand adequate security. What are the advantages and disadvantages of a centralised and decentralised system in bank services such as payment and remittance?

1.2 Having a Centralised Trusted Party – Advantages and Disadvantages

1.3 Security, Integrity and Privacy Issues of a Decentralised System 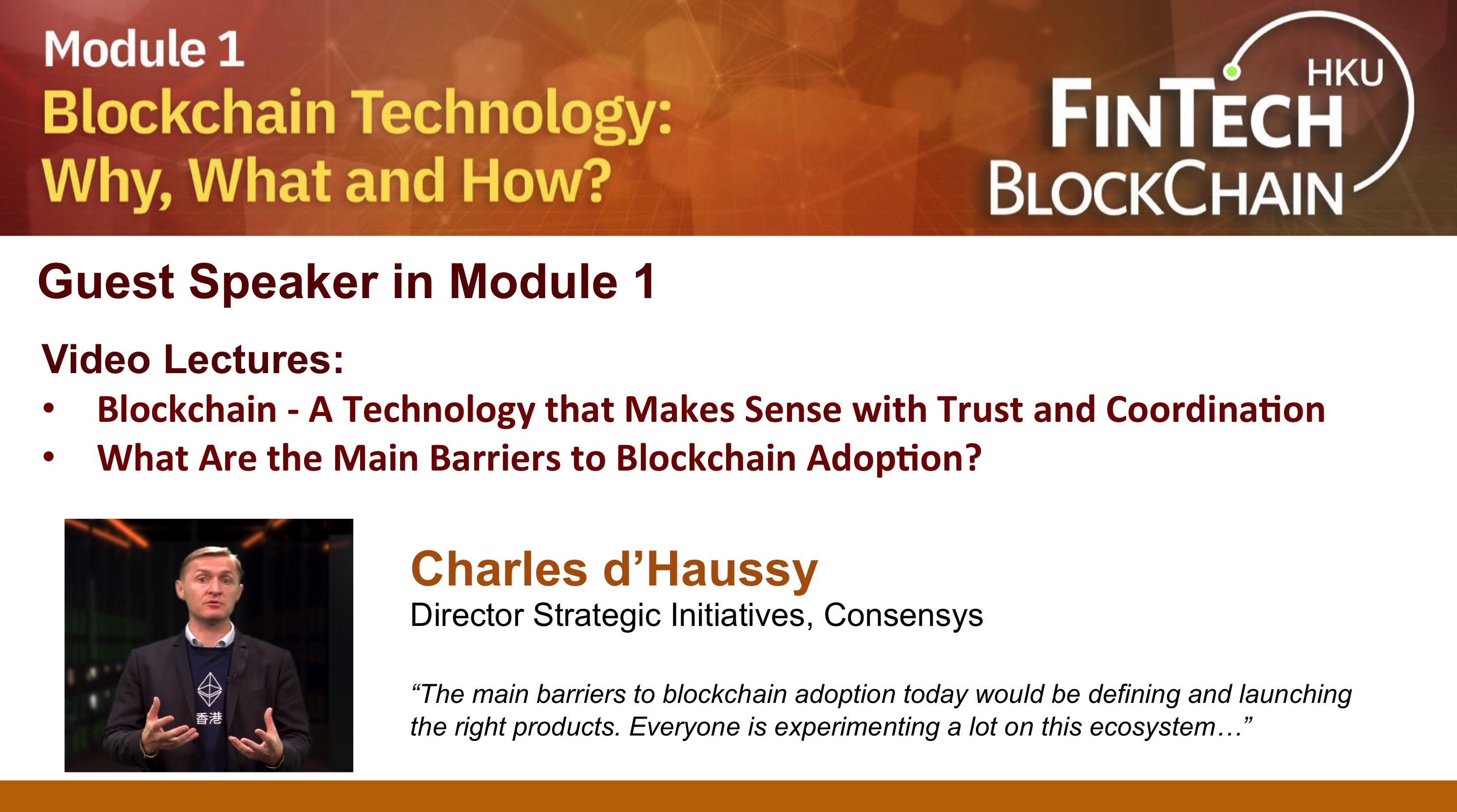 1.4 Blockchain – A Technology that Makes Sense with Trust and Coordination (An Interview with Charles d’Haussy from ConsenSys)

What Are the Main Barriers to Blockchain Adoption? (Charles d’Haussy from ConsenSys) 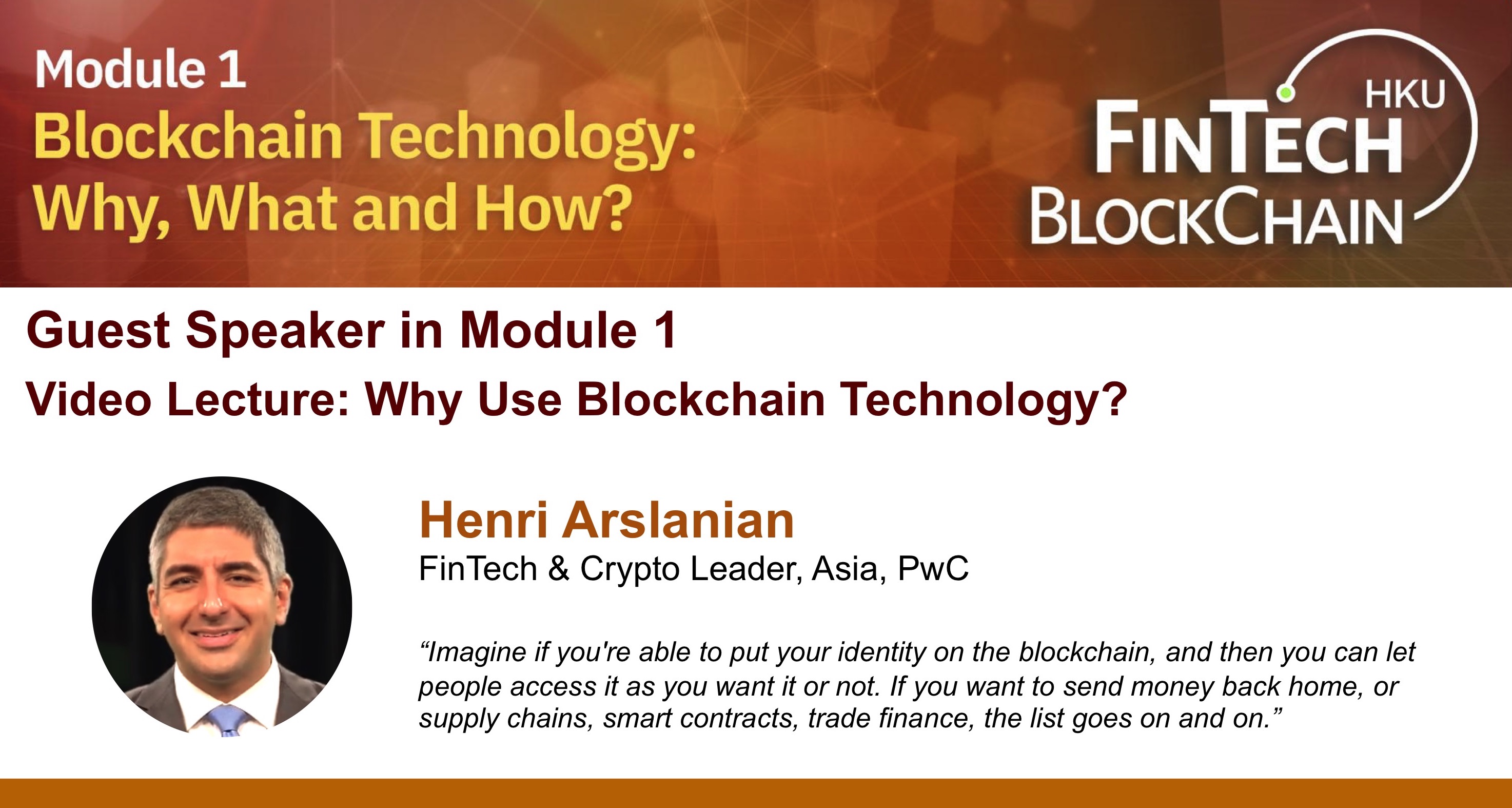 1.6 Why Use Blockchain Technology? (Henri Arslanian from PwC)

*Reference Videos What is Blockchain? [Introduction to FinTech Video 2.9A) by Professor Douglas Arner

*Reference Video What is Blockchain? [Introduction to FinTech Videos 2.9B) by Professor Douglas Arner

*Reference Video What is Blockchain? [Introduction to FinTech Videos 2.9B) by Professor Douglas Arner

References and Suggestions for Further Reading in Module 1

(1) Differences between a distributed system and a decentralized system:

Welcome to Module 2 Technological and Cryptographic Elements in Blockchain.

In Module 2, you will see how blockchain technology works. Blockchains are designed to be immutable. You will see how the cryptographic elements including public-private key pairs, digital signatures and hash values are at work to achieve the special properties of blockchain. In addition to hearing from chief instructor Dr Siu Ming Yiu, you will also meet our guest speaker Prasanna Mathiannal (Co-Founder of MaGEHold) later in the module.

Happy learning and have a great week.

After completing Module 2, learners should be able to: 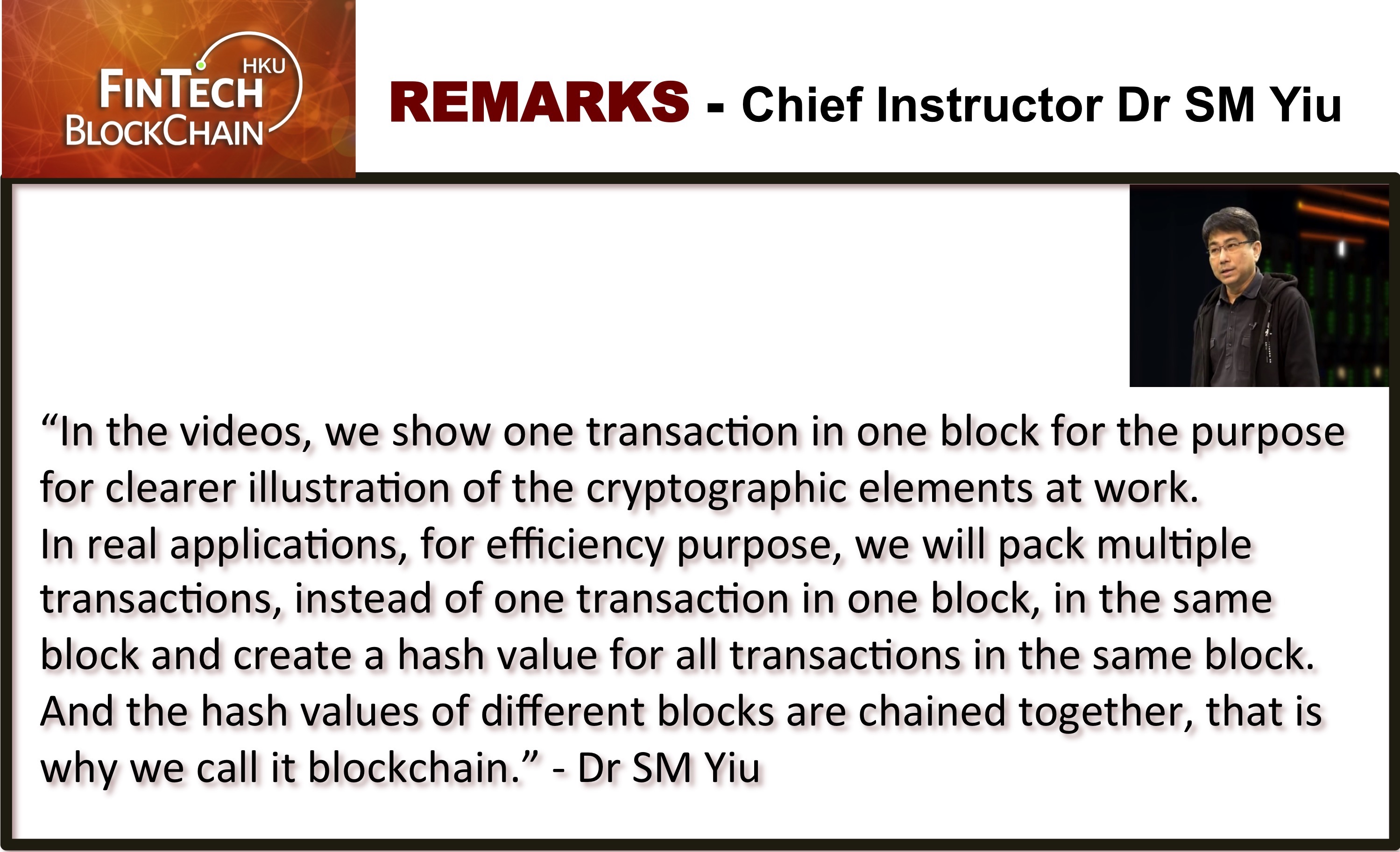 Video: 2.2.2 Who can Modify Transactions?

Video: 2.2.3 Who Will Maintain Transactions? 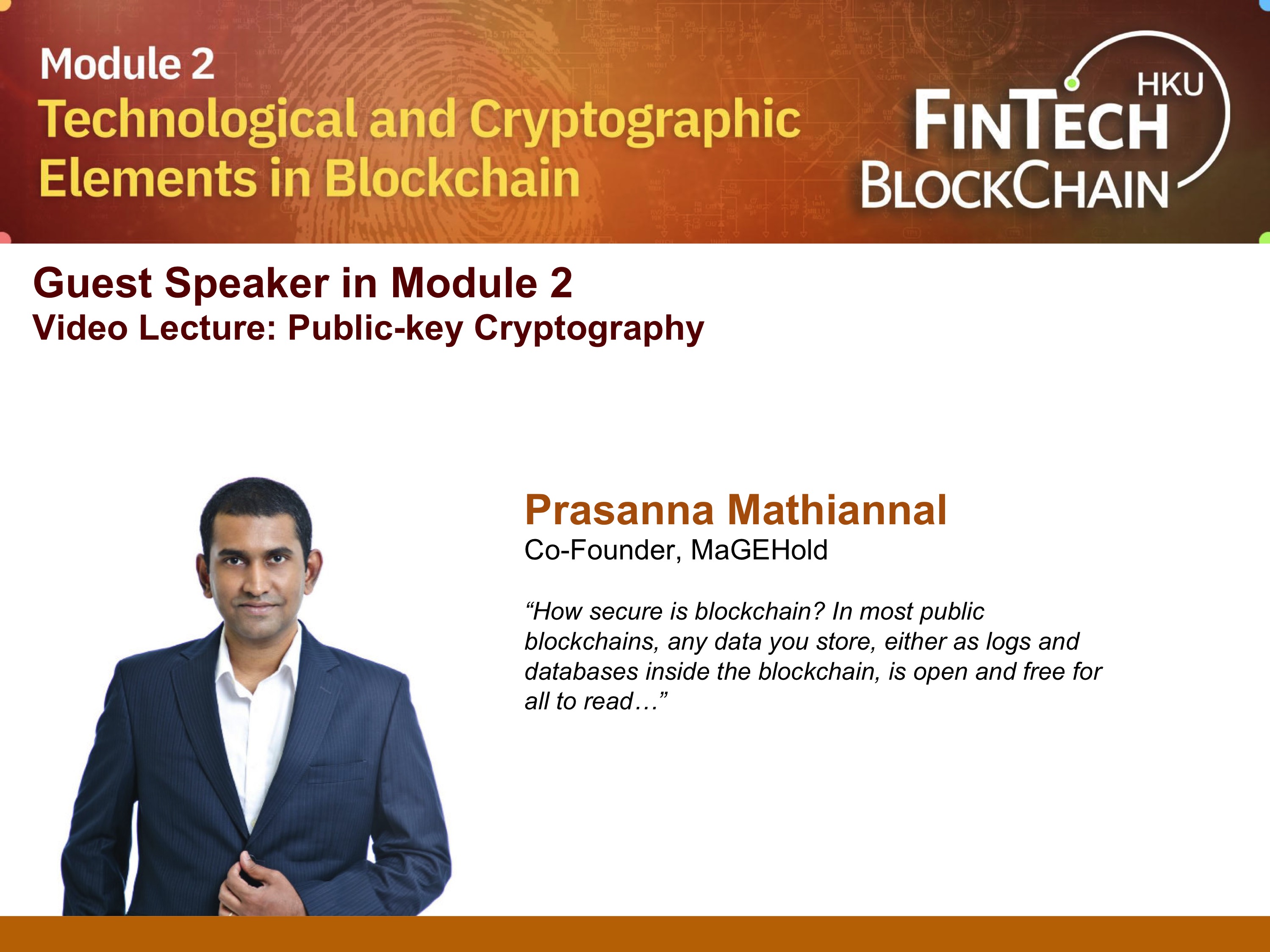 References and Suggestions for Further Reading in Module 2

(2) Industry articles about the features of blockchain:

In Module 3, we will continue  to look at the technical aspects of blockchain including the characteristics of three major blockchain platforms, Bitcoin, Ethereum and Hyperledger. We will explore and compare these platforms under five perspectives including platform design objectives, public vs. private block chain, whether there’s generation of cryptocurrencies on the platform, consensus algorithms, privacy and confidentiality.

In addition to hearing from chief instructor Dr. SM Yiu, later in the module, we will also have Charles d’Haussy (Director Strategic Initiatives ConsenSys) to share his expert opinions  on consensus algorithm and trustlessness and immutability of blockchain technology.

Happy learning and have a great week.

After completing Module 3, learners should be able to:

3.1.1: Classification of Blockchain Platforms (Part 1) – An Overview of the 5 Key Perspectives

Video 3.1.2: Classification of Blockchain Platforms (Part 2) – Perspectives No. 1 and 2

3.2.1: What is Ethereum? (with Charles d’Haussy from ConsenSys)

3.3.1: What is Ethereum’s Place in Today’s FinTech Ecosystem? (with Charles d’Haussy from ConsenSys)

3.4.1: Trustlessness and Immutability of Blockchain Technology (with Charles d’Haussy from ConsenSys)

3.4.2: Proof of Work and Proof Stake (with Charles d’Haussy from ConsenSys)

3.5.1: Tokenizing (with Charles d’Haussy from ConsenSys)

3.7.1 Hyperledger Blockchain Technologies (An Interview with Brian Behlendorf from The Linux Foundation)

What Are the Differences Between Hyperledger and Other Blockchain Technologies? (Brian Behlendorf from The Linux Foundation)

References and Suggestions for Further Reading in Module 3

NOTE: We may come across information about comparisons of different blockchain platforms (note that those may not be based on the same 5 perspectives discussed in Module 3. Quite often we’ll consider the comparisons from the domain of applications.

(2) Information of some popular blockchain platforms

(3) Industry articles and information on: tokenization, fund raising, and differences of ICO and STO

The Difference Between ICO and STO

Welcome to Module 4 – Blockchain Applications. In the last Module, we looked at the characteristics of three major blockchain platforms, Bitcoin, Ethereum and Hyperledger.

In Module 4, you will first be introduced to key selection criteria for blockchain applications by chief instructor Dr. SM Yiu. Then you will hear from our guest speakers, Dr. Paul Sin (Consulting Partner from Deloitte, China) and Anil Kudalkar (MD, MaGESpire Partners) who will share with us some real world use cases in enterprise blockchain including: trade finance, supply chain financing, cross-border connectivity, capital markets and government services.

Furthermore, our guest speaker Charles d’Haussy (Director Strategic Initiatives ConsenSys) will talk about how to deploy an application on Ethereum and some interesting use cases of ConsenSys on Ethereum.

After completing Module 4, learners should be able to:

4.2.0 Blockchain and Enterprise – A Technology of Coordination (Charles d’Haussy from ConsenSys)

How to Deploy an Application on the Ethereum Blockchain? (Charles D’Haussy from ConSenSys)

4.6.1 Use of Hyperledger Blockchain Technology in Trade Finance, Supply Chain and Digital Identity (Brian Behlendorf from The Linux Foundation)

4.7.1 Use Case: How Walmart Brought Unprecedented Transparency to the Food Supply Chain with Hyperledger Fabric (Julian Gordon from The Linux Foundation)

References and Suggestions for Further Reading in Module 4

NOTE: There are many published information on blockchain applications and use cases, the following are some examples:

Module 5 The Limitations, Opportunities and Challenges of Blockchain

After completing Module 5, learners should be able to:

5.2.1 Risks and Limitations of Blockchain: Privacy (Malcolm Wright from Diginex)

5.2.2 Risks and Limitations of Blockchain: Security (Malcolm Wright from Diginex)

5.4.3 What Are the Benefits of Blockchain in Banking? (Johnny Cheung, General Counsel, B.C. Technology Group)

References and Suggestions for Further Reading in Module 5

Welcome to Module 6 – The “Evil” Sides of Blockchain and Legal Regulations for Blockchain. In the last Module, we looked at security and privacy concerns of a blockchain platform and learnt about some of the risks with blockchain solutions, as well as, the benefits and opportunities in using blockchain for different industrial applications.

In Module 6, we are happy to introduce five guest speakers to you, among others, Bowie Lau (Founder & MD of MaGESpire) will talk about the “dark” side of blockchain. Then, Malcolm Wright (Chief Compliance Officer at Diginex) will speak about criminal use of payment blockchains. Furthermore, we will hear from Charles d’Haussy (Director of Strategic Initiatives at ConsenSys) who will share his views on whether blockchains need regulations.

Professor Douglas Arner of HKU Law Faculty (Course director of Introduction to FinTech) will discuss the global practice and the role of financial regulations for blockchain. And we will also learn about global digital assets regulatory trends from Henri Arslanian (FinTech & Crypto Leader for Asia, PwC).

This is an exciting week. May you enjoy the great contents from our guest speakers.

After completing Module 6, learners should be able to:

6.2 The “Dark” Side of Blockchain (Bowie Lau from MaGESPire)

6.3 Criminal Use of Payment Blockchains (Malcolm Wright from Diginex)

6.4 The Role of Financial Regulations for Blockchain (Professor Douglas Arner, Faculty of Law at the University of Hong Kong)

References and Suggestions for Further Reading in Module 6